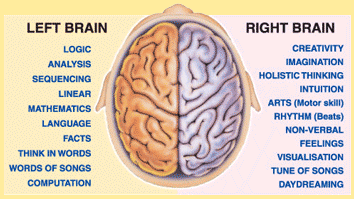 Every single animal that you can possibly think of – including fish, tigers, cats, and dogs – has a brain. Brains are among the most important parts of their bodies. However, a human brain is a little bit different. Although our brains are just as important for our bodies as animals’ brains are important for their bodies, our brains are different. Sure, it is not the largest organ in our body, but our brain gives us the power to think, speak, and solve problems. Because of that, brain truly is one of the most amazing organs in a human body.

A human brain performs all sorts of different actions. It controls the body temperature, and it handles all the physical movement that walking, standing, talking, and sitting require. Our brains also allow us to think, dream, reason with other human beings, and experience all sorts of different emotions. Without a brain, we wouldn’t be able to see, hear, talk, taste, or even touch anything that is around us. Although it almost seems unimaginable, all of these tasks are coordinated, controlled, and regulated by one small organ called brain.

Have you ever wondered what brains are made of? Well, the answer to this question is actually pretty simple. A human brain is made of 100 billion neurons. These neurons have the ability to transmit electrochemical signals from our brains to our bodies and vice versa. Think of this as your computer’s ability to send and receive information. Although neurons share the same characteristics as all the other cells in your body, what makes them unique is their ability to transmit signals over long distances.

Many lower-class animals – such as fish, birds, and reptiles – don’t really think to much. They are mostly focused on eating, drinking, sleeping, and reproducing. All of these are instinctual processes, which means that they don’t need to think too hard in order to perform these actions. Human beings perform all of these actions as well, and just like animals, we rely on our instincts rather than our ability to think.

The spinal cord and brain are not really the same thing. However, that doesn’t mean that spinal cord is any less important than the brain itself. The spinal cord is a downward extension of a brain stem, which basically means that it connects the brain to the spine. It contains some very important things, such as motor and sensory pathways from the body, and it has its own reflex pathways.